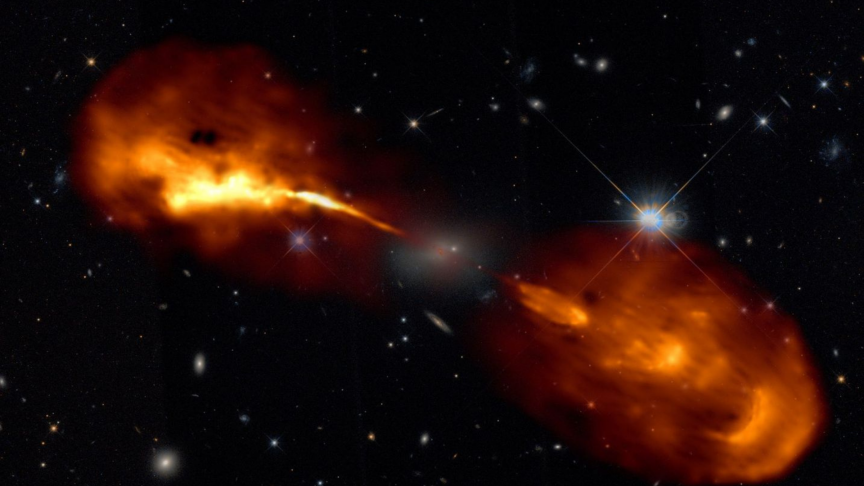 When you look at the night sky with your telescope, what you see is only a small fraction of the information the galaxies send out there. Ordinary telescopes only capture information in the visible light spectrum, but celestial bodies constantly emit gamma waves, x-rays, long-wavelength microwaves, and even FM radio waves (88 – 108 megahertz). European scientists focused on the information sent by radio waves and were able to put together the most detailed images of galaxies to date.

To capture this FM radio frequency data, a European collaboration of scientists has installed more than 70,000 radio antennas across Europe. This Low Frequency Antenna Array (LOFAR) is connected to each other with a fiber optic cable and supported by supercomputers that do all the data processing and in principle constitute a giant radio telescope that spans the whole of the world. Europe. With the center located at Exloo in the Netherlands, the entire operation was designed, built and is currently operated by the Dutch Institute for Radio Astronomy, ASTRON. Once conceptualized, the project was limited to the Netherlands and LOFAR antennas were installed in the country, resulting in the diameter of the telescope’s receiving “lens” to be approximately 120 km wide.

During its ten years of operation, LOFAR has signed partners such as France, Germany, Ireland, Italy, Latvia, the Netherlands, Poland, Sweden and the United Kingdom. These countries have installed at least one LOFAR antenna station in their geographic areas extending the diameter of the receiving “lens” to about 1200 miles (2000 km). Not only that, the collaboration also increased the resolution of the images by 20 times, an ASTRON press release said.

Network image processing is not a new concept and signals from multiple antennas are processed simultaneously to produce an image. The LOFAR team, however, used a different strategy. They first digitized the signals received at each antenna, then sent the image to a central processor to assemble the final images, at very precise resolutions. The researchers also released the data processing pipeline to allow other researchers to replicate their strategy and use LOFAR for their own applications.

The researchers used LOFAR to observe different galaxies. The Hubble Space Telescope (HST) does not have a radio wave sensor. The team was therefore able to observe the galaxies captured by HST and provide additional information using radio waves. The team was particularly interested in super-massive black holes that leave jets of radiation outside the visible spectrum but visible in radio waves. Thanks to the higher resolution of LOFAR, scientists were also able to capture detailed images of these jets.

Processing these images was not easy. The massive array of 70,000 antennas generated enormous amounts of data. To produce a single image, the supercomputers processed 13 terabits (1.6 gigabytes) of data per second, the equivalent of 300 DVDs of data that scientists could use in just a few days, said Frits Sweijen of the University of Leiden, partner of LOFAR. project.

The decade-long work culminated in 11 research articles published in a special issue of Astronomy and astrophysics.