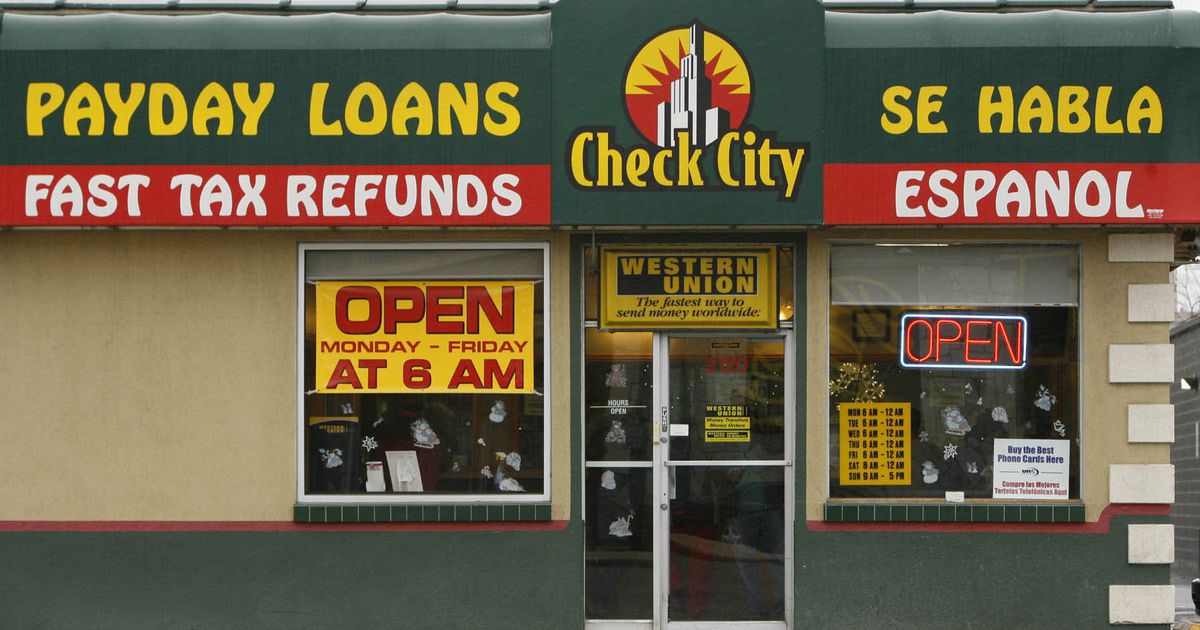 This undated photo shows a sign that reads Check City, which offers payday loans, in Salt Lake City. Americans take out about $ 50 billion in payday loans a year, each accumulating hundreds of dollars in fees and interest. (Leah Hogsten / The Salt Lake Tribune via AP)

Under the leadership of a new chief appointed by President Donald Trump, the Federal Bureau of Consumer Financial Protection proposes to rescind an Obama-era rule designed to protect Americans from predatory payday lenders (who charge an APR average of 528% in Utah). This move would stop requiring lenders to ensure that a customer is able to repay loans. He says the current rule may make access to credit too difficult for the poor. Consumer groups say the change would void protection. It was first proposed by then acting agency director Mick Mulvaney, who is now the acting White House chief of staff. He argued when he was a congressman from South Carolina that the agency overstepped its bounds and sought to bring it under control. [CNN]

At the head of the news: The controversial bill to replace Proposition 3’s comprehensive Medicaid expansion plan with a more restrictive and initially more expensive expansion is heading to full house. A committee approved it 9-6 Wednesday. Three Republicans voted against, including the sponsor of the bill, Rep. Jim Dunnigan. [Trib] [Fox13] [DNews] [ABC4]

-> Since Utah’s first Senator Martha Hughes Cannon stepped down in 1896, only 29 other women have held the same position. This information created a stir among social media users in the state after it was shared by an amateur historian from Utah. [Trib]

-> A bill that would ban abortions in Utah of fetuses diagnosed with Down syndrome has been approved by committee and is heading to the plenary chamber. Representative Karianne Lisonbee said a clause in the bill would avoid legal pitfalls by suspending the ban until the measure is upheld by a court with jurisdiction over Utah. [Trib] [DNews] [ABC4]

Tweets of the day: @RobertGehrke “Christensen says prop 3 needs to be fixed or the money would go out of public education.” His bill is MORE EXPENSIVE than prop 3. #utpol“

-> @transport_tom “Big snowstorm in Salt Lake today. Delayed working hours, closed schools, roads with important safeguards. Now imagine how stronger, safer and more resilient our economy and infrastructure would be if we focused land use / development on walking and transit.

-> @Mskriebe “I am the 31st Senator in Utah history and the 22nd Democratic Senator.”

In other news: After years of effort, a bill to give more bite to laws prohibiting the use of cell phones while driving has finally been passed by committee and is on its way to the House. [Trib] [DNews]

-> While the federal government could risk another shutdown if a budget proposal is not approved by February 16, the Utah state government will not face the same problem. As the Legislature does every year, it passed a rudimentary base budget for 2019 on Wednesday. It will discuss additions to those budgets during the remainder of its session. [Trib]

-> Poll shows 55% of Utahns would oppose a decision by the legislature to repeal or amend Proposition 4, which ordered the formation of an independent redistribution commission to help stop gerrymandering. [UtahPolicy]

-> Jennie Taylor, widow of North Ogden Mayor Brent Taylor who was killed in Afghanistan last year, recounts how her trip to Washington to hear the State of the Union address and receive honors for her husband gave more than meaning to his death. [DNews]

-> In this week’s episode of “Trib Talk,” Salt Lake Tribune editor-in-chief Jennifer Napier-Pearce talks about the role of a free press in society and the importance of journalism. [Trib]

-> Tribune columnist Robert Gehrke responds to claims that the expansion of Medicaid would alter the state budget. [Trib]

-> Columnist Michelle Quist argues that the legislature “must slow down its accelerated steamroller on what everyone can say is Utah’s true will” when it passed Proposition 3 to expand Medicaid. [Trib]

Nationally: As US House Democrats step up their investigations into the Trump administration, the president goes wild in tweets early Thursday morning, calling it a witch hunt and “presidential harassment.” [WaPost]

-> A third wave of scandals for Democrats erupted in Virginia on Wednesday after Attorney General Mark Herring admitted to wearing blackface as well, after calling on Gov. Ralph Northam to step down for doing the same. It comes the same week that sexual assault allegations surfaced against the state’s Lieutenant Governor Justin Fairfax, whom the accuser spoke publicly on Wednesday, detailing the events of the alleged assault. [Politico] [NYTimes]

-> House Speaker Nancy Pelosi predicted on Wednesday that Republican leaders in Congress would not support another partial government shutdown due to funding for President Trump’s proposal to build a wall along the Mexican border. [TheHill]

-> The House Intelligence Committee voted on Wednesday to send transcripts of interviews with witnesses to its investigation into Russia to Special Advocate Robert Mueller. They could be used to bring new perjury charges against witnesses who testified before the committee, including Donald Trump Jr. [Politico]

-> The US Department of Justice announced an investigation into a plea deal that allowed Jeffrey E. Epstein to avoid federal charges on the charge of assaulting dozens of underage girls in 2007. The current one US Secretary of Labor R. Alexander Acosta was the prosecutor at the time in charge of negotiating the agreement. [NYTimes]

-> NASA scientists announced on Wednesday that the Earth’s average surface temperature last year was the fourth highest in nearly 140 years. The hottest five years in recorded history were the last five. [NYTimes]

Do you have any advice? A birthday, a wedding or an anniversary to announce? Drop us a note at [email protected]